You have no items in your cart

FREE DOMESTIC SHIPPING FOR ORDERS OVER $69

Tiny little luxuries with beautiful earthy scents. I arranged them in an old spruce bowl from a thrift shop and they were happily received. 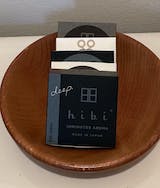 Thank you for your kind words.

A
Anne
Little Scent of Heaven!

Thank you for the thorough review:)